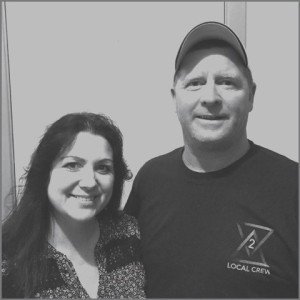 Chris and Shelley Armstrong have owned and run this family business since 2005. Each from the Clayton area, Shelley and Chris both attended Almonte District High School and recall bicycling the 16 kilometres to and from Clayton.

Chris’s father owned the sawmill where Chris spend many hours working during his young adulthood. Shelley worked in Ottawa as an optician. When marriage and family plans arose some 20 years ago, the couple decided that living and working in their home community far outweighed Shelley’s commute to Ottawa or Chris’ intense days at the sawmill.

The General Store offered them the promise of being able to stay in community, live above the store and be involved with their children’s upbringing. As a result, their son Brett and daughter Taylor, now teenagers, have had the unique opportunity of being raised in the store, which has been their extended home and part of their everyday life. The children, like their parents, have become known and loved by the patrons, and pitch in whenever store duty calls.

Over the last dozen years Chris and Shelley have continued to maintain and upgrade the location, including architectural details like replacing the lower roofline and dormer running trim (gingerbread). There is the ongoing challenge in merchandising to keep product lines updated and regular goods re-stocked.

While it is certainly a punctuation of community pride to have a general store that can trace its roots back to the early 1800’s in Canada, the truth is what makes a general store truly a remarkable landmark in today’s merchandising environment is not its history but it’s very presence. As Clarence Gemmill – former long-time owner of the Clayton (then Gemmill’s) General Store – told the Millstone: “it is not so much a tourist attraction, as other general stores have become, but primarily serves the village.”

Service to community is what marks the contribution of the family-run Clayton General Store. It’s easy to see that the Armstrongs extend this sense of family to friends and neighbours of “greater” Clayton and the visitors to their store. Shelley and Chris share their welcoming nature, generous spirit and deep commitment.

(excerpts from article written by A. Francis)