L’Atelier Weaving Studio Tissage is situated at Carriageway Studios, in Almonte . Marie-France Gosselin is a fibre artist who is passionate about weaving. She was renting space  from Carriageway Studios to teach rigid heddle weaving. It quickly became obvious that a permanent studio was in the future and, out of 120 square feet, she has created a small weaver’s paradise. She is an equipment dealer for Ashford (New Zealand), Louet (Netherlands) and Schacht Spindle Co., Harrisville and Mirrix (USA).  She also carries Lunatic Fringe color gamps, linen and organic cottons in addition to Purl and Loom products.  Having travelled with Mayan Hands in Guatemala, a fair trade organization that worked with Mayan women, you can also find some of their beautiful baskets and natural dyed cotton. L’Atelier is usually open on Fridays and Saturdays from 10:00am to 4:00pm and by appointment.L’Atelier offers a number of weaving, fiber arts and spinning classes. 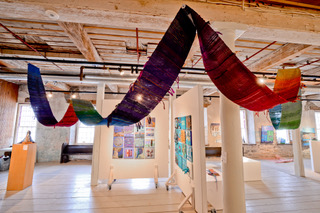